In 2012, Northumberland County Council made a submission to GeoPlaces’ Citizen Award for their work in identifying properties. While there submission did not win, it was highly commended, and it certainly caught my eye. I was particularly interested in how they used building polygons in the OS MasterMap Topographic Layer to determine tertiary BLPU classification. This outcome is achieved in two phases. First, determine the relationship between the building polygons, then assign these polygons with a UPRN.

Two years later, I managed to catch up with the Ryan Gilchrist, the author of the case study, to discuss how he went about achieving this goal. Ryan very kindly provided me with his slides and some SQL scripts, and I subsequently went to work translating them for use with PostGIS. The scripts Ryan provided only allowed me to complete phase one, the result of which you can see below:

Filtering out building polygons less than 25 sq.m excludes garages and small ancillary buildings, which can easily mess up the spatial query. This is not perfect; there are infact house with smaller than 25 sq.m, but it was a good starting point.

To my shame, I never really progressed further than this project. Other projects ended up taking priority, and there were a few conditionals that needed to be met in the gazetteer first before phase two could be implemented.

Fast forward a year and I am now using FME for the bulk of my data processing and analysis. With the aforementioned conditionals met (thanks to FME and GeoPlace), I had the time and opportunity to complete this project.

Rather than stick with the tried and tested method mentioned above, I opted to see if I could replicate the process using FME. This had two advantages; I could combine the two phases in a single workspace, and I wouldn’t have to mess around with temp tables.

The key to successfully replicating the SQL scripts was find an adequate alternative for the touches function. Up steps the SpatialRelator Transformer. This determines the topological relationship between a set of features (touches, intersects, overlays) and tags them with a related count value. It also allows you to specify which attributes (fields) must differ which in this case was the TOID.

Using a SELECT statement (see below) in a PostGIS Reader I was able to extract the required polygons and route them into both the Requestor and Supplier ports of the SpatialRelator. This appended the number of touches between each unique feature. Using a TestFilter, I split features into three ports labelled zero touch, one touch and two touch as these could be automatically classified as detached, semi-detached as terraced respectively. Features that has 3 or more touches are filtered into the unclassified port and set aside for a later date.

To get around this little quirk, I needed to split the workflow into two streams. The first stream would route the one touch and two touch ports from the TestFilter into the Requestor and Supplier ports of a second SpatialRelator respectively. From this I could classify polygons with zero touches as semi-detached, and polygons with one touch as end terrace. The Output was then be routed to an AttributeCreator. The second stream would route the two touch and zero touch ports straight into an second Attribute Creator. 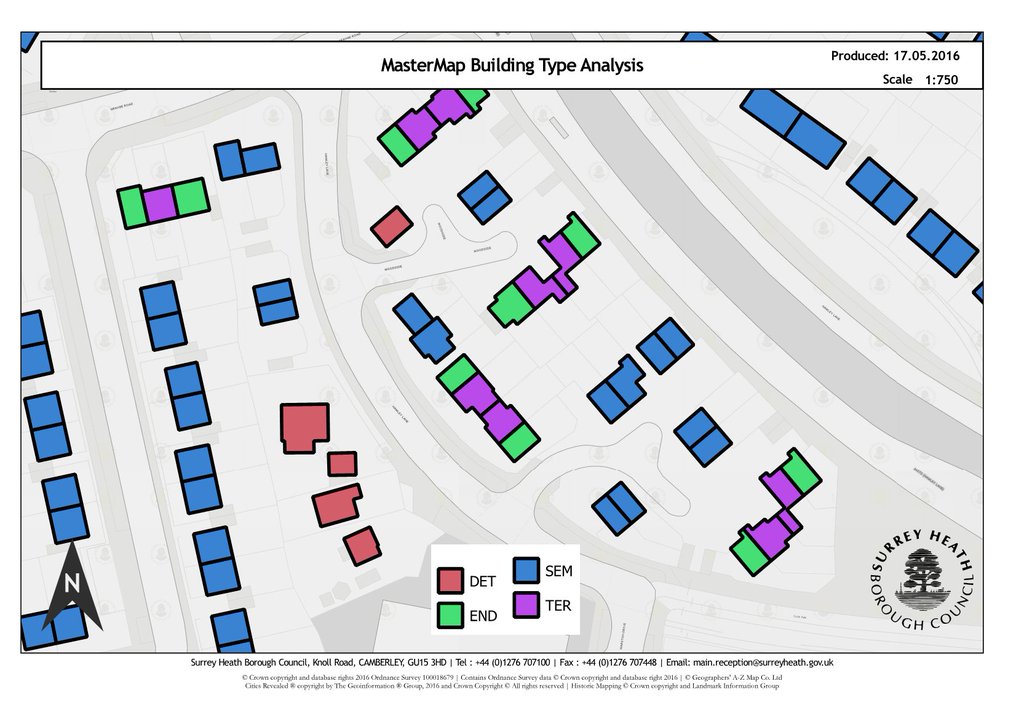 Now that we have the building polygons populated with a classification value I needed to assign a UPRN. To achieve this I used a SQLCreator to read in the UPRN, Eastings, Northings, Logical Status and BLPU Classification from the BLPU table in my Aligned Assets Gazetteer. You can see the SQL statement I used below. Before passing these gazetteer records into the PointOnAreaOverlayer I needed to spatialise them. This was done by using the VertexCreator to create a point using the easting and northing, and the CoordinateSystemSetter to assign a EPSG. Once this was done I could pass the BLPU points into the point port and the building polygons into the area port.

This is not ideal as you will inevitably have instances where there is more than one point per building polygon. This might indicate flats, bedsits or something else entirely. In an effort to filter these out I only included BLPU records that didn’t have a parent UPRN. For those that pass all my where clauses, I only took features that had one to one match and routed off the rest into a separate file to look at later.

Using this method I managed to update 88% of my residential BLPU’s to tertiary classification in my LLPG. It also highlighted a number of errors such as points outside of the building or buildings missing from the OS MasterMap Topographic Layer. The improvements to this dateset has greatly improved its value and usefulness. It now has the potential to be used in demographic studies, business intelligence, emergency planning and more.